
search
0 shopping_basket
en
close
What are you looking for ?
search
close
Choice of language
English French German

Back to the news
News
ISS Switzerland’s participation in the 21st Congress of the IAAH
Unaccompanied minors 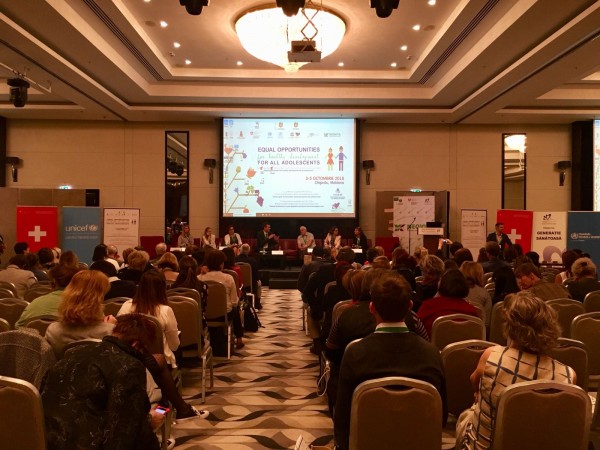 ISS Switzerland participated for the third time in the 21st European Congress of the International Association for Adolescent Health (IAAH) which took place from 3 to 5 October 2018 at Chisinau, Moldavia.

The Congress, which gathered together 300 representatives working in the health sector, international organisations and NGOs as well as 70 young Moldavian volunteers, was based on the theme ‘Equal Opportunities for Healthy Development for all Adolescents’.

The participants exchanged useful information and practices on the access of adolescents to health services as well as on the engagement of young people in developing this type of service.  The event also provided a central role for adolescents to participate through two discussion forums and by involving the young Moldavians in the organisation of the Congress.

ISS Switzerland animated a workshop on children on the move, in collaboration with Dr Anne Meynard, expert in adolescent health in Geneva and Terre des Hommes in Moldavia.  The workshop addressed the issue of young people who migrate to Europe, some of whom are unaccompanied minors but some of whom are Europeans who migrate to a neighbouring country.  The workshop focused on the dangers of trafficking as well as the situation of children whose parents leave their home countries to work elsewhere in Europe, referred to as ‘left-behind children’, a situation which particularly affects Moldavia.

The Congress closed with the dissemination of resolutions mainly calling on all States to develop health services geared to adolescents through including them in the process, reinforcing collaboration among all those concerned and considering the specific needs of young migrants or those whose parents have emigrated.

The event was supported by the Swiss Agency for Development and Cooperation (SDC), the World Health Organization (WHO), UNESCO and UNICEF.